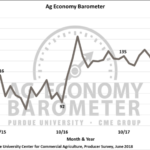 Agricultural producer sentiment rose slightly in June according to the Purdue University/CME Group Ag Economy Barometer. The increase was unexpected given unresolved trade war concerns and sharp price declines for key commodities, including corn, wheat and, especially, soybeans during the month. The June barometer reading of 143 was only 2 points higher than May. The barometer is based on a monthly survey of 400 agricultural producers from across the country.

“In June, we saw a sizeable drop in commodity prices that caught many observers by surprise,” said James Mintert, the barometer’s principal investigator and director of Purdue University’s Center for Commercial Agriculture, “But, despite the price decline, producers’ appraisal of current economic conditions improved compared to May. However, it was clear from survey responses that uncertainty regarding the agricultural outlook increased considerably.”

The barometer’s rise was underpinned by an increase in the Index of Current Conditions, which climbed to 138 compared to a reading of 132 a month earlier. The Index of Future Expectations remained nearly unchanged with a reading of 146 in June, 1 point higher than in May.

Each month the survey asks producers whether they expect “good times” or “bad times” in U.S. agriculture, both one-year and five-years ahead. This month, respondents provided mixed responses with many producers shifting to “neutral” and away from a “good” or “bad” response, that suggests a rise in uncertainty for the future. Several times a year, the barometer also asks producers if they expect prices for key commodities to move higher, lower or remain unchanged over the next 12 months. Compared to the beginning of 2018, producers have been slowly signaling that they expect commodity prices to recede and this trend continued in June with an increase in the percentage of producers expecting lower prices.

The Ag Economy Barometer, Index of Current Conditions and Index of Future Expectations are available on the Bloomberg Terminal under the following ticker symbols: AGECBARO, AGECCURC and AGECFTEX.

About the Purdue University Center for Commercial Agriculture

As the world’s leading and most diverse derivatives marketplace, CME Group (www.cmegroup.com) is where the world comes to manage risk. CME Group exchanges offer the widest range of global benchmark products across all major asset classes, including futures and options based on interest rates, equity indexes, foreign exchange, energy, agricultural products and metals. Around the world, CME Group brings buyers and sellers together through its CME Globex® electronic trading platform. CME Group also operates one of the world’s leading central counterparty clearing providers through CME Clearing, which offers clearing and settlement services across asset classes for exchange-traded and over-the-counter derivatives. CME Group products and services ensure that businesses around the world can effectively manage risk and achieve growth.