The Purdue University/CME Group Ag Economy Barometer landed at 135 in October, up three points from September. It represented the third-highest reading since data collection began two years ago. 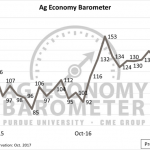 For the second year in a row, producers were asked whether they plan to make management changes, such as lowering fertilizer or seeding rates, or adjusting their hybrid or variety packages for the upcoming cropping season. The share planning reductions in seeding rates and changes to their hybrid or variety choices for 2018 changed little from last October with 19 percent expecting lower seeding rates and 35 percent planning to adjust seed variety or hybrid packages. But the percentage of producers planning to reduce fertilizer usage in 2018 was noticeably smaller. Just one-third of respondents said they plan to reduce fertilizer rates in 2018, down from 46 percent a year ago.

“One possible reason for the smaller share of producers planning to reduce fertilizer rates in 2018 is prices,” said James Mintert, director of Purdue’s Center for Commercial Agriculture and principal investigator on the barometer project. “Fertilizer prices, particularly for anhydrous ammonia, are lower than a year ago. For example, recent price quotes for anhydrous ammonia were 20 percent lower than a year ago, with other crop nutrient prices exhibiting smaller price declines.”

For the first time, producers were asked about their expectations for farmland rental expenses in 2018. An overwhelming 80 percent of respondents said that they expect farmland rental rates to be unchanged in 2018 compared to 2017. The remaining 20 percent of respondents were split equally between those expecting rental rates to be higher and those expecting lower rates in 2018.

The Ag Economy Barometer, Index of Current Conditions and Index of Future Expectations are available on the Bloomberg Terminal under the following ticker symbols: AGECBARO, AGECCURC and AGECFTEX.